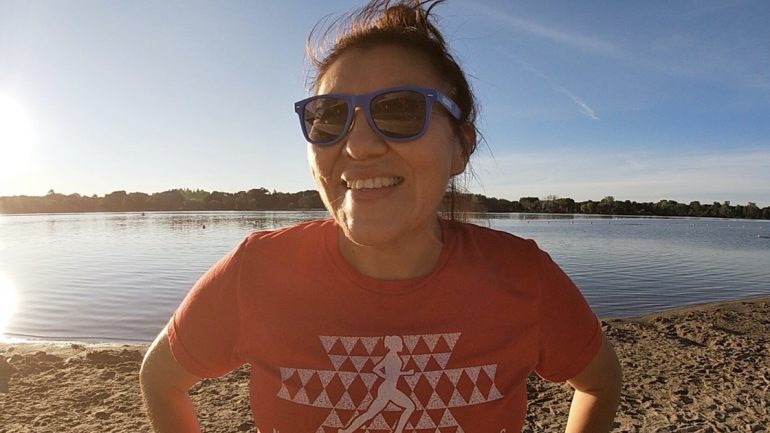 Verna Volker – We Exist, We are Real

Carrie chats with Verna Volker, the founder of Native Women Running! They talk about how she grew up in the Navajo Nation with 9 siblings, how she found running, creating community for all native women, and much more.

My name is Verna Volker. I am from the Navajo Nation. My clan is Tódích’íi’nii (Bitterwater)nishlíi, Hashtl’ishnii (Mud People) bashishchiin.

I grew up in the Dzilnaoodilii area of New Mexico. I am the youngest of ten children. The first three years of my life I was raised in a hogan (a traditional Navajo house) with a dirt floor. I was like many native people who grew up in poverty. At the age of three, I lost my dad to cancer. From there on, I was raised by a single mother who fought her own demons. I was also raised by my oldest sister who put her teenage life on hold to raise her siblings. Because of my sister, I was able to graduate high school and college to become a teacher.

Growing up, I have experienced many traumatic events in my life at a very young age. Alcoholism, death, poverty and abandonment. It was because of older siblings that the cycle of addiction was broken. I believe I am where I am today because of those who looked out for me….even when I didn’t see it.

Today, I am married. My husband and I have four beautiful children. We live in the Twin CIties of Minnesota.

In 2009, I started running simply to lose weight. That slowly became a love for running. I started running 5K races which slowly went from half marathons, marathons to ultra marathons. In the past two years, I have tapped into a resilience that I never knew I had. I believe that is why I have taken on long distance running.

Running inspired me to start an account called Native Women Running. This account is for underrepresented native women runners in the running world. It has rapidly brought community, motivation and inspiration of native women who like to be active.

Many people have supported me in my past. Today, I am given the honor to support others on their running through Native Women Running. It’s been a positive healing experience.