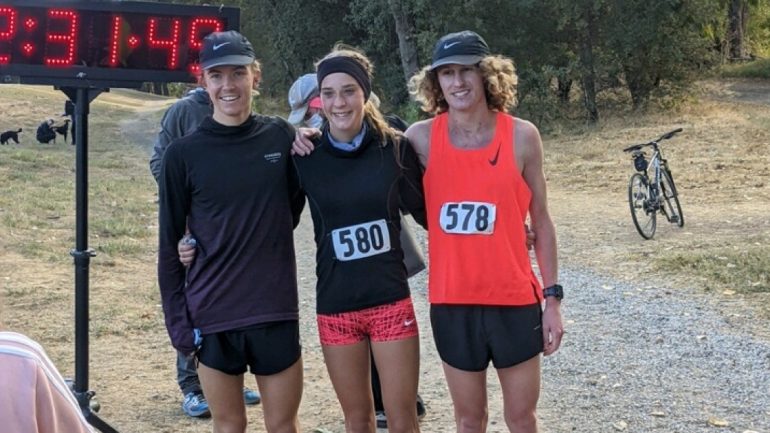 Carrie chats with Tierney Wolfgram, Adam Sjolund, and Carson Leavitt! With pacing assistance from Adam and Carson, Tierney recently set the American Junior Marathon record with a time of 2:31:49 as a 17-year-old! They discuss the event, the preparation, COVID, wildfires, and where Tierney goes next after setting and nailing such a big goal at such a young age.

Personal – Son of Steve and Laurie Sjolund and sibling of sister, Emma Sjolund … was an IB Diploma candidate and Valedictorian … intends to study mechanical engineering … enjoys hiking, cmaping and spending time with family and friends.

(courtesy Nevada Wolf Pack)
Freshman (2019) – Scored 5th overall and was the 3rd fastest time out of the Wolf Pack athletes competing in the 8k at the Nevada Twilight Classic with a time of 24:50 … Scored in 51st at the MW Championship with his time of 26:10 … His time of 36:05.7 at the NCAA Mountain Region Championship was good enough to rank him at #127 overall.

Personal – Son of Michael and Tracy Leavitt… has an older sister, Kaelin… born in Truckee Calif. … likes to bike, learn and volunteer.