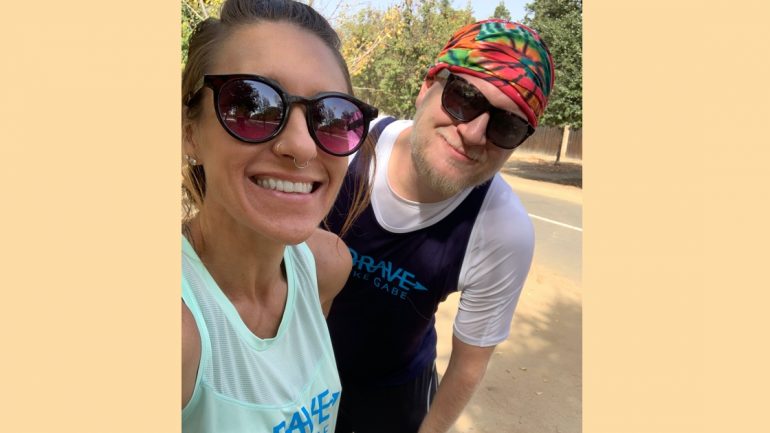 Amanda & Joel Stetler – If You Don’t See a Dream, Make One!

Carrie concludes a month of interviews all around the Brave Like Gabe Foundation in honor of her late friend Gabe Grunewald!

This week, Carrie chats with Joel & Amanda Stetler! Joel is currently fighting stage 4 fibromyxoid sarcoma, a cancer that is yet to have a cure. They chat about Joel’s 10 year battle with cancer, Amanda’s own health scare in 2009, how to parent while trying to shield their 3 children through this journey, how to *not* disarm your support team, and so much more!

I’m a mom of three, (Layla 9, Milo 7, drake 4)
I love any kind of running, road or trails, mountains or beach, city or country roads.
I ran the Big Sur Marathon, New York City Marathon, and California International Marathon all in 2019, with a PR at CIM.
I teach and have been practicing yoga for 17 years, and am lucky to teach students at the college level as well as in a local yoga studio.
I earned my bachelors and masters degree in Kinesiology/ exercise science from Fresno state university.
I love teaching and working with athletes at the college level, helping athletes of various backgrounds use yoga as a recovery tool.
My husband allows me to adopt all the fluffy animals and currently have 3 cats and three dogs, including our new puppy Mr. Business.

(Bio courtesy of the Brave Like Gabe Foundation)
Name: Joel Stetler
Age: 36
Diagnosis: Fibromyxoid sarcoma
Years of Survivorship: It’s complicated: 10 years since a doctor misdiagnosed it as a hematoma in my leg, 4 years since it was diagnosed correctly (stage 4 by then).
Location: Coarsegold, California

Running and being physically active have helped me recover from the myriad of treatments since my diagnosis. My doctor has pointed that out on numerous occasions. But what I didn’t expect was the mental recovery I’d experience through all those miles.

My diagnosis came shortly after I hit a major personal running milestone. On my 32nd birthday, I decided to run my age in miles. My first ultramarathon distance. I was stoked when I finished it. But several weeks later, just after Thanksgiving in 2015, I was given the news that I had a rare form of cancer for which there was no known cure — not even a known treatment.

I think I just assumed that running would no longer be a part of my life from that point on. Full time work, six months of aggressive chemo, and a lung surgery kept my mind far away from health and fitness.

It wasn’t until we approached my next birthday when my specialist told me about a 5k race benefiting the Sarcoma Foundation of America. As fate would have it, it was scheduled on my birthday! Before I knew it, an entire team was rallied around my family to run this race, complete with matching #bringbackthebeard shirts.

It may have been just 10% of my distance goal, but that 5k served as the pivot point to get me focused again. Not just on running, but in life in general. That event kick-started my renewed focus on what I would later hear Justin Grunewald refer to as “relentless forward progress.”Since then, I’ve found that the more I open up, the more fighters I meet. And I’ve met some of the best fighters while running.

With the guidance of my wife Amanda and the support of my friend Blaine, I managed to get myself back up to marathon distance in time for the 2019 San Francisco Marathon. That training cycle and race showed me that while cancer may be the monster in my car (as Amanda and I have always referred to it), it doesn’t get to decide where we go.

I was still sore from the San Francisco marathon when Amanda showed me a Brave Like Gabe post on Instagram asking if anyone would wear a charity bib for them at the 2019 New York City Marathon. She asked me if I’d consider it. I said “yes,” and her response was “Good, because I already told them you would!”

The next eight weeks became a whirlwind of training and community support that was so positively overwhelming. Prior to my NYC training cycle, my runs were angry. The trails had been the place I went to get mad at my circumstances. But with the San Francisco marathon under my belt, NYC on my horizon, and Brave Like Gabe in my corner, the trails became the place where I didn’t just face my demons, but repurposed them to be a catalyst for growth and healing in my cancer journey.

Not long after NYC, I was contacted by the amazing Phil Shin, asking if I’d like to join Team Brave Like Gabe in the Los Angeles Marathon. By now, these were my people. There was no question – so I hit the trails again, this time with the massive surplus of hope I received from San Francisco marathon and NYC. Every run was a therapy session. Every mile gave me more reasons to hope for a cure. Every interaction with Team Brave Like Gabe was an affirmation that Amanda and I aren’t alone in this fight.

Race day in Los Angeles confirmed it: running is life-giving.