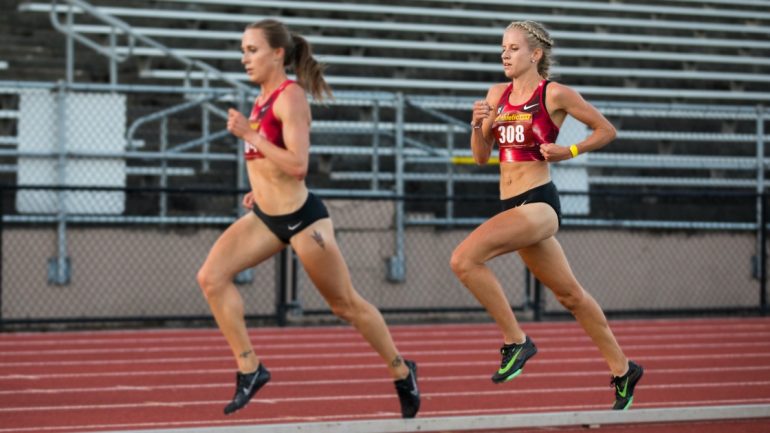 Carrie welcomes elite runner Karissa Schweizer to the show! They go deep on Karissa’s recent performance at a closed Bowerman Track Club meet where she ran a 5K in 14:26, the second-fastest American 5K time ever! They also have a wide-ranging conversation around her decorated past in college, how COVID-19 has changed professional running, and much more.

Karissa grew up in Des Moines, Iowa and carries on the strong tradition of Midwesterners joining BTC. She dabbled in all manner of sports growing up from softball to soccer to basketball (she’s very competitive in the occasional game of Knockout the BTC pro team may or may not indulge in post-practice (shh don’t tell Jerry)). However, with her Mom, Dad, and Grandpa all having been collegiate runners, she seemed destined to eventually settle on Track. She attended Dowling Catholic, a running powerhouse in the state, where she was on three state championship teams and won an individual state title in the 3,000m in 2011. She graduated with impressive personal bests of 4:34 for 1,500m and 9:54 for 3,000m, but had not yet become the national phenomenon that we know her as today.

In her first year and a half at the University of Missouri she had some modest successes and was competitive at the conference level in the SEC. She burst onto the national scene at the outdoor NCAA Championships her sophomore year when she finished 3rd in her first ever national track meet. As wonderful as that breakout was, it would soon be eclipsed by her tremendous Junior season. She won the NCAA titles in Cross Country, the indoor 5,000m, and the outdoor 5,000m. In addition, she was the runner up in the indoor 3,000m and finished 4th at the USATF Championships in the 5,000m.