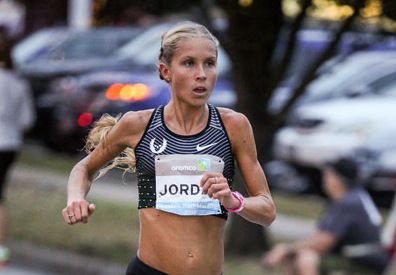 Carrie interviews Jordan Hasay! They chat about her Boston Marathon race strategy, where she broke the record for the fastest American debut by a woman in 2:23:00. Jordan also reflects on her relationship with her parents, and she gives the inside scoop on being coached by Alberto Salazar.

Jordan Hasay is an American distance runner who runs for the Nike Oregon Project. She grew up in Arroyo Grande, attending Mission College Preparatory Catholic High School. In 2008 she was selected as Girls High School Athlete of the Year at Track & Field News. She was the ninth high school athlete to grace the cover of Track and Field News magazine in March of 2009. After high school she attended the University of Oregon where she became one of their most decorated female athletes, earning a place in the Ducks history books. After graduation, Jordan joined the Nike Oregon Project to be coached by Alberto Salazar. She placed second at the 2013 US National Championships in the 10,000m. Later, lowering her PR for the event down to 31:46.42, she secured her spot to represent the US at the 2013 World Championships. She won the 2016 USATF 10 Mile Road Championships in St. Paul, Minnesota. In January 2017, Jordan placed 4th in the Aramco Houston Half Marathon in 01:08:40 setting an American female course record, and the second fastest half-marathon debut for an American female. She made her marathon debut at the 2017 Boston Marathon, finishing third overall and breaking the American record for the fastest debut marathon in 2:23:00.