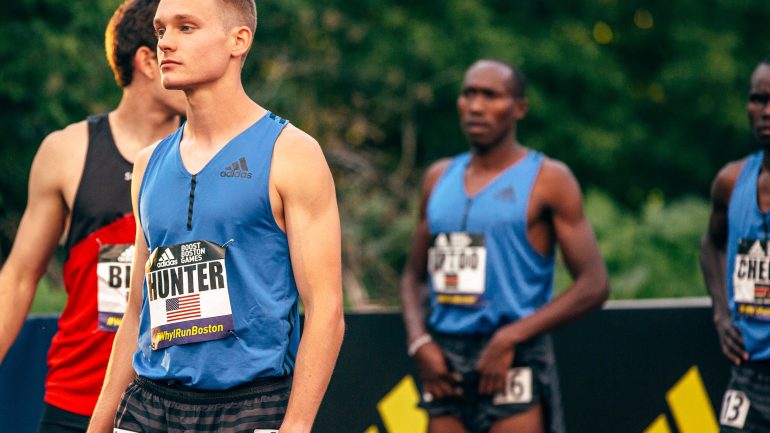 Drew Hunter: Every Step of the Way

Carrie interviews elite runner Drew Hunter! They chat about his decision to sign with Adidas straight out of high school, his struggle with lyme disease and his racing plans for 2017.

Drew Hunter is an American distance runner from Purcellville, VA. He is the national indoor mile record holder for high school athletes, a feat he achieved in 2016 with a time of 3 minutes 57.81 seconds. Drew won the High School Boys 3000-meter race as a high school sophomore at the Penn Relays Carnival in 2014. He went on to set the national sophomore class record in the 3000m in 8:16.31. In the fall of 2014, Hunter placed 4th at the Foot Locker Cross Country National Championships. He won the New Balance National Indoor two-mile national title in a winning time of 8:48.22. He started his outdoor season with a 4:07 victory at the Penn Relays, becoming the first high school athlete since Olympian Matt Centrowitz to own both the high school boys 3K and mile Penn Relays titles. Hunter achieved a season best of 4:02.36 at the Adidas Dream Mile at the Adidas Grand Prix. In 2015, Drew set a course record of 14:26 at the Foot Locker South regional meet before winning his first Foot Locker National title in 14:55.7. In his indoor debut, Hunter broke the high school boys national 3k record with a time of 7:59.33 at the Camel City Elite meet in Winston-Salem, North Carolina. He followed up that performance with another national record in the high school boys indoor mile, running 3:58.25 at the Armory Track and Field Invitational. By doing this he became the 8th High School Athlete to break 4 minutes in the mile. He was also the second High School Athlete to break 4 in the mile indoors. Hunter then waited two weeks before resetting the record with a 3:57.81 performance at the Milrose Games. He signed a 10-year contract with Adidas in July 2016 and went pro instead of running in a collegiate program.