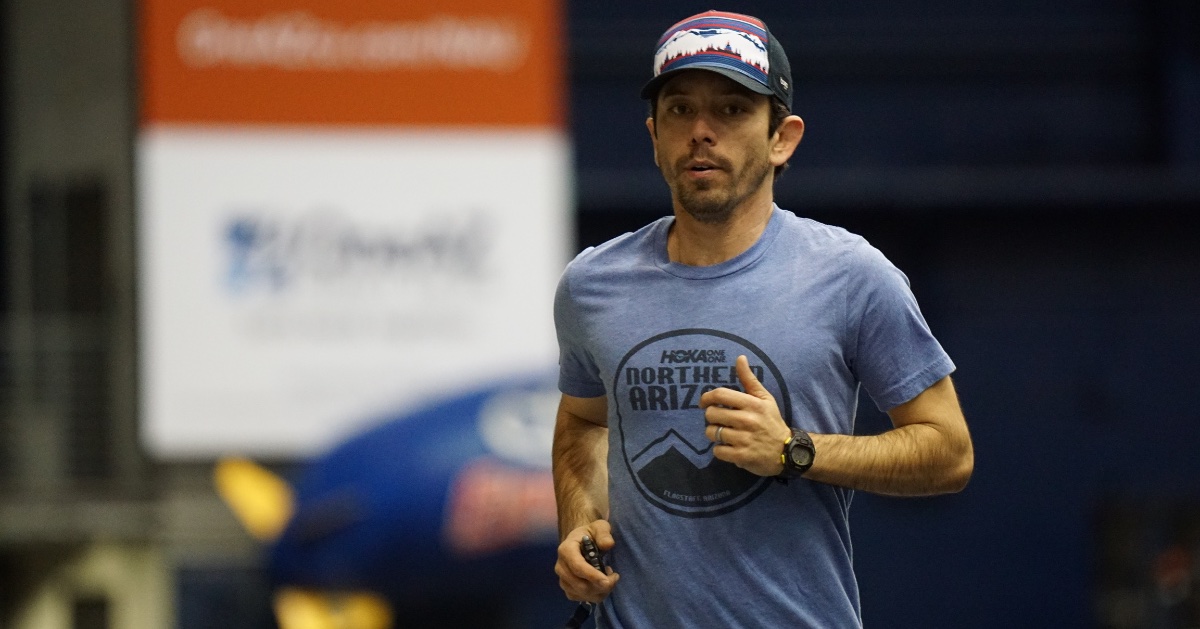 Carrie welcomes Hoka Northern Arizona Elite coach Ben Rosario back to the show! They talk about his new book, “Run Like A Pro (Even If You’re Slow),” the training tips provided in the book, an update on some of his athletes, the state of the sport, and much more!

The Atlanta Journal Constitution Peachtree Road Race is back to its one day event! On Monday, July 4th, 2022, we will see that sea of Red, White, and Blue all together again. In-person registration is from March 15-31, 2022 but you can still run it virtually and you have a little longer to register: March 15 – May 31. There’s only one Peachtree!

Bio courtesy of HOKA NAZ Elite
BEN’S STORY
Ben has been just about everything in the running industry; elite athlete, special events director for a big city marathon, running store owner, marketing director, elite athlete coordinator and of course…coach. His number one passion though, has always been the competitive side of the sport and he brings a healthy obsession for success to his role as coach/executive director of Northern Arizona Elite.

AS A COACH
Ben has coached everyone from third graders, to beginning adult runners to World Championship performers. His motivational skills and training knowledge have translated to success at every level. His work with the Big River Racing Team in Saint Louis produced three different Olympic Trials qualifiers; Shannon Leinert (800), Julie Lossos (Marathon) and Adam MacDowell (Marathon). He also led Canadian Stephanie Hood to top-11 finishes at the Boston (2:44:44) and Chicago (2:35:09) Marathons in 2008 as well as the Canadian Cross Country Title.

In his six+ years with Northern Arizona Elite, Ben’s athletes have won U.S. National Titles in cross country and on the roads at 10k, the half marathon, and the 25k, and a New Zealand National Title on the track. The team has been represented at the World Cross Country Championships in 2017 and 2019, the World Half Marathon Championships in 2014 and 2016 and at the World Track and Field Championships in 2015. His athletes have also competed at the European Athletics Championships, the Great Edinburgh International XC Meet, the NACAC Cross County Championships, the NACAC Track Championships, the Pan American Cup Cross Country Meet and the Pan American Games. In 2016, the team produced two sixth-place finishes at the Olympic Trials Marathon and two fourth-place finishes in the 10,000 meters at the Olympic Track and Field Trials. At the 2020 Olympic Marathon Trials, four HOKA NAZ Elite athletes posted top 20 finishes, including three in the top eight in the women’s race led by Aliphine Tuliamuk–the Trials Champion. At World Marathon Majors, HOKA NAZ Elite athletes have recorded 10 top-10 finishes including a sixth at Boston in 2018, Chicago in 2019, and New York in 2021 as well as a seventh at New York City in 2018 and Boston in 2019. Other top marathon finishes include a win at the Grandma’s Marathon in 2018 and runner-up finishes at the USATF Marathon Championships in 2015 and 2018.

AS AN ATHLETE
Ben was a Division II All American at Truman State University, before landing a spot on the Hansons-Brooks Distance Project team in 2003. There he became the youngest qualifier for the 2004 Olympic Trials Marathon where he finished 37th. He returned to his hometown of Saint Louis in the summer of 2005 and that fall finished second at the U.S. Marathon Championships at the Twin Cities Marathon. He ended his career with personal bests of 4:03 in the mile and 2:18 in the marathon.