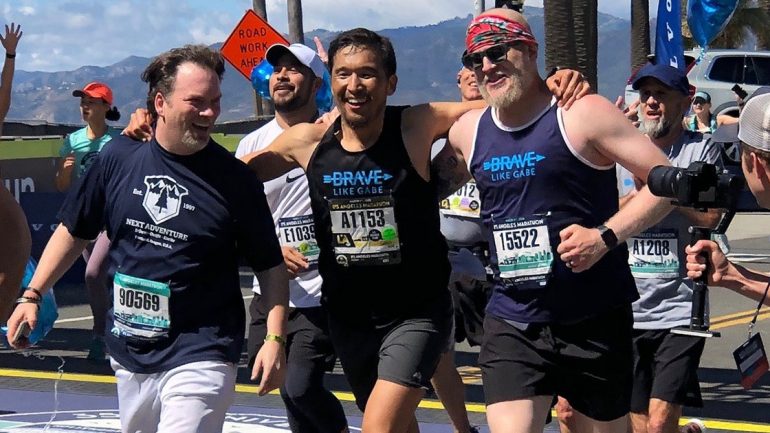 Carrie kicks off a month of interviews all around the Brave Like Gabe Foundation in honor of her late friend Gabe Grunewald!

This week, Carrie chats with Phil Shin, a cancer survivor and fellow runner. They chat about how Phil found out about his liver cancer, what it’s like to have to ask someone to help save your life, and how he raised over $10,000 for the Brave Like Gabe Foundation.

“Do something that moves you forward. Just pick a spot and go to it. It doesn’t matter how far away it is or how long it takes to get there. Just get up and move towards it. Then go there again the next day and then the next.” – Phil Shin⁣⁣
⁣⁣
Phil learned of his liver cancer diagnosis shortly after finishing the 2018 LA Marathon. Just three weeks later, he underwent surgery. Phil’s fitness from years of running helped him recover quickly so he could resume working towards his big dream of qualifying for the Boston Marathon; “I suppose you could say that running literally saved my life.”⁣⁣
⁣⁣
While chasing that dream, Phil felt renewed purpose and gratitude for running. He was savoring the process more than ever and, much to his surprise, running faster than ever. He ran his fastest marathon by more than 20 minutes and qualified for the 2020 Boston Marathon. It was the greatest day of his life.⁣ ⁣
⁣⁣
But before he could run the Boston Marathon, his cancer came back. He was told a liver transplant was the only option; he’d have to wait until they found a match. Not wanting to let agony consume him, Phil kept running… and kept getting faster. He finished four marathons ? in the 6 months after his recurrence–and, even more importantly, he showed himself and those around him that cancer couldn’t stop him from pursuing his dreams.
⁣⁣
“I want to show that running on hope is a real thing and that it will make a difference in your life, with or without cancer.” That’s exactly what Phil and his friend and live donor, Mark, did a mere few weeks ago at the 2020 LA Marathon, just 6 months post-transplant.⁣⁣ Not only did Phil run the LA Marathon, he put 20 runners together to run with him for Team Brave Like Gabe and raised over $10,000 to support Gabe’s passion for rare cancer research and to empower cancer survivors to continue to thrive through physical activity.

Phil’s journey was captured in a 3-part documentary series for the LA Marathon titled “35 Reasons”. Links to the episode can be found below.