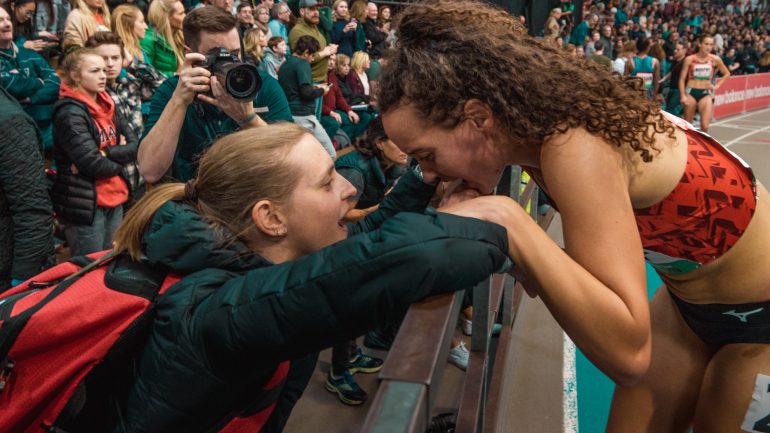 Amy Yoder Begley – Back Her Up

Carrie chats with fellow Olympian Amy Yoder Begley! They discuss her time with former coach Alberto Salazar and she shares some of what happened during her time with the Nike Oregon Project. They also discuss her coaching the elite team at the Atlanta Track Club and how she is preparing 7 athletes for the upcoming Olympic Marathon Trials.

It’s hard for track fans to forget Amy’s run at the 2008 Olympic Track and Field trials. With a 67 second final lap, she beat the clock to get the “A” standard for the 10,000 meters at the Olympic Games in Beijing. The next year, Amy finished 6th at the IAAF World Championships in the 10,000 meters, running a personal best of 31:13. Only seven American women have ever run faster. She was the 2009 U.S. National Champion at 5K and 15K on the roads.
At the University of Arkansas, Amy was a 15-time All-American and two-time NCAA National Champion. Since retiring from professional competition, she coached at the University of Connecticut and founded the Distance Divas in Portland, OR, to help post-collegiate women bridge the gap to a possible professional career. In 2016, Amy experienced the marathon for the first time running for Kilometer Kids at the TCS New York City Marathon.
Amy is Atlanta Track Club’s first full-time coach, starting with the organization in 2014.
Amy has celiac disease and speaks with and helps other runners who need to adhere to a gluten-free diet. She lives in Mableton with her husband Andrew and her dogs Gabby and Lucy.